This is the screen of the rules, posted on the website about the HK health department.

It will be a story about why and how I have moved to Hong Kong, what kind of difficulties I had and what’s the procedure now since we’re all in deep shit with these COVID restrictions. It was painful and still is.

As mentioned earlier, I had to go to start my Ph.D. degree research and courses (mandatory and chosen).  So, I was in Guangdong province in Foshan. Hong Kong is in Guangdong province. Usually, during non-pandemic years it’s easy to get to HK: you go to Shenzhen, sit on the subway train until you reach the end, go up, then through the border, and then in HK subway. This is it.

Another way — train. You buy tickets on a speed train and voila! You’re in HK. Cheap. Fast. Two hours (subway from Shenzhen) or one, maybe a bit more, by train.

However, since we’re in the pandemic year (years, decades, centuries — choose a favorite one) different countries imposed different restriction measures. In PRC the measures are described as ‘zero tolerance to COVID-19’. It can be defined also as ‘zero domestic tolerance’ since back in January 2020 PRC didn’t stop local citizens and foreigners from leaving Mainland that in fact helped to spread the virus worldwide. I do not criticize it since I had a flight in January 2020 back to Russia for my surgery. So, if I start criticizing it would be hypocrisy. What happened happens and it’s other countries’ responsibility and authority to find who is accountable and for what. In this blog, I only share my own experience.

So, let’s get back to the topic. What are the restrictions in Mainland China and Hong Kong? What are the differences? 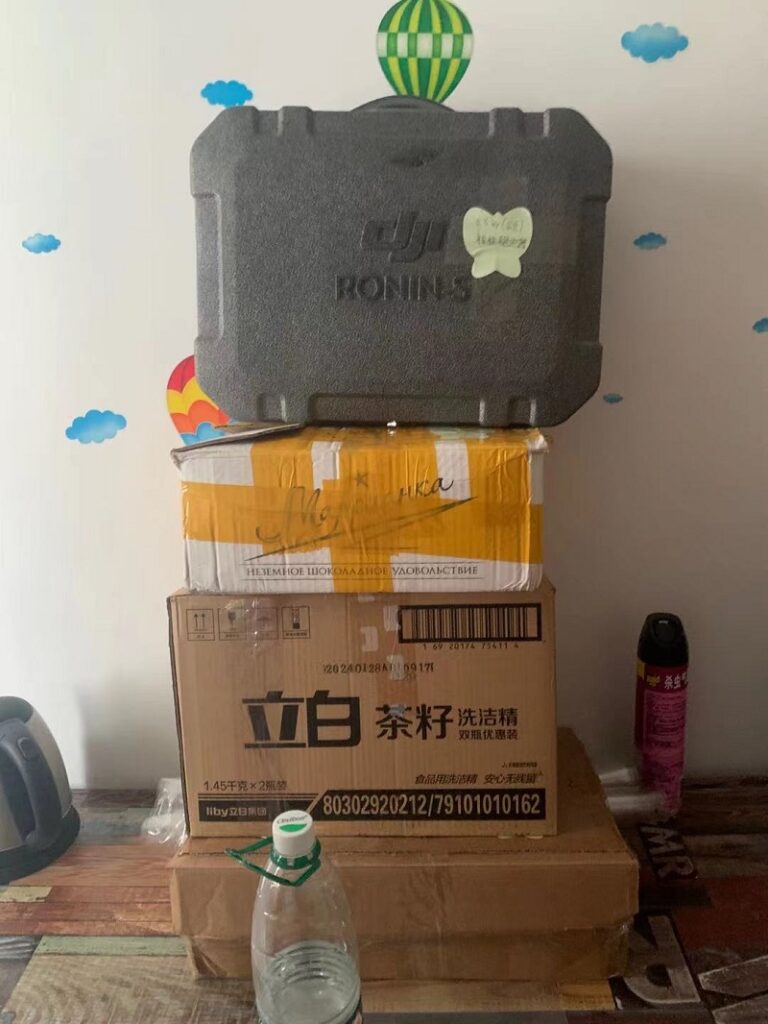 First, you need a QR-code. What is it? It is the code on your phone apps: Alipay or one of WeChat mini-programs. The app tracks your movements around the country. And if you were in the place of the outbreak or have positive COVID testing, your QR-code may become yellow or red. If it’s green, you’re fine. I didn’t notice that apps track the movements very thoroughly, maybe because I’m a foreigner, not a Chinese citizen.

Usually, the code is needed in malls and other public places. For example, the subway. In the Shanghai subway, the code is not asked every time. But in Guangzhou, you have to show it. In Foshan buses, we had to show the code and register with another QC-code that we took the particular bus. If you refuse to register, the bus driver will not go anywhere and may call the police.

Pretty different depending on the province and the situation. The measures can be more strict or suddenly lifted.

The screenshot of the mini-program from WeChat about certified hospitals in Mainland.

Since the enactment of the National Security Law (NSL) the situation in the SAR became more dramatic. The authorities imposed strict anti-COVID measures to reduce the daily cases in the city to a minimum (right now — 0). At the same time, these measures are used to ban any assemblies, any political and protest activities in the cities. Violation of these measures may follow with huge fines and criminal punishment.

HK announced two policies: Return to HK and arrival of other inbound and international travelers. The first policy is about students, residents of HK, permanent residents, who come back. The rules for this policy are easier. For inbound travelers, the rules are relatively strict. You have to be under quarantine, find the hotel, etc. If you want to arrive by plane from another country to stay in Hong Kong (not transit), then, you should check the country list and the specified measures.

I will explain my case more thoroughly (second case).

The initial list of hospitals that are authorized for the nucleic test, accepted by the HK health department. Updated later.

People coming from Mainland China should be quarantined for seven or 14 days depending on the province of departure. In the beginning, in July, all Mainland China travelers had to be under quarantine.

There is a ‘vaccine bubble’ strategy  — everyone who is vaccinated had to be under quarantine less than usual. HK Health Department released the list of recognized vaccines (most of WHO accepted vaccines). I am vaccinated with the Chinese vaccine, so, I had to be quarantined for 7 days.

However, the policies changed at the end of July after the outbreak in Nanjing. First, they changed to ‘you need a nucleic test to come to HK from the designated hospital‘. What is it? A hospital recognized by HK authorities. Later, the policy was updated with the description that all tests from the certified hospitals from the Mainland China Ministry of Health are legit. Then, they added: travelers from Guangdong province (my case) did not need to have a nucleic test prior to the arrival. Policies were changing almost every three days. I have decided not to take any risks though. 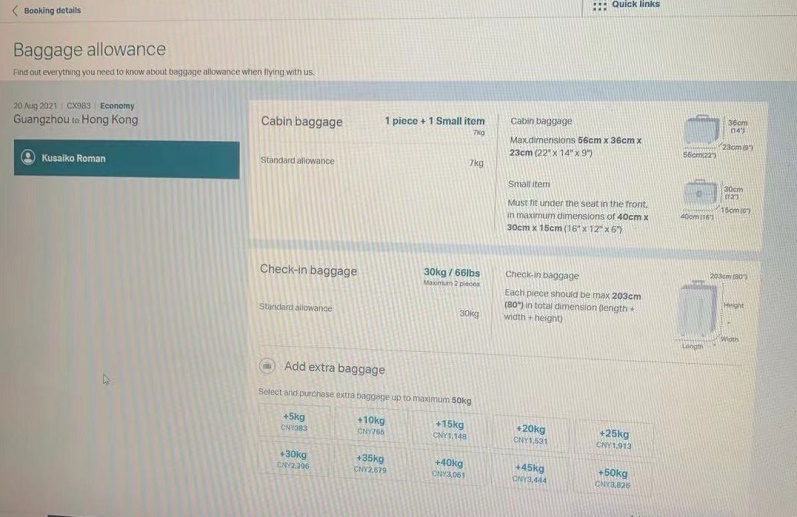 Dimensions and prices for the additional pieces of luggage.

First, it is possible to arrive in HK by boat from Shenzhen. Why did I choose the pricier way? The ferry is packed. The department of health had recommended me to buy a flight ticket if I don’t want to be stuck in Shenzhen or if I don’t want to wait for hours. Second, the procedures are very clear at the airport, and I could exchange some currency there. The website allows seeing what booths still work at the airport (pretty much everything still works despite quarantine).

Next, it took hours to find the hotel. All hotels accept bank cards, but not from Mainland. My Russian card had expired. And I couldn’t use the virtual card. So, I had to prepare cash. To buy HKD in Foshan I had to go to the bank four times (Bank of China) since I had terminated accounts from my salary bank. ICBC did not allow me since I had opened an account in Shanghai and I’m a foreigner.

After I had booked the hotel, ensured that they will accept cash, after booking the tickets I had to prepare the luggage. By the end of July, I had moved to a room in the anti cafe where we played board games. I had packed unnecessary things and instructed girls to send me the luggage when I had my address in HK.

Next, I had to book the hotel in Guangzhou since I wanted to ensure I will land in HK and won’t have issues with the sudden rules change about the nucleic test. I had found a hotel in Guangzhou near the designated hospital. And then, I bought additional luggage KG because I had a bit more than allowed. Cathay Pacific allows two pieces of luggage on the plane (strict measurements and no more than 8 KG), also two pieces of checked-in luggage no more than 32 KG (usual suitcase with wheels that you use for travel). The price is high, but it is convenient — can log in on the website, buy additional KG.

I have printed all documents, literally everything. Including the confirmation of buying KG. And it worked because the system at the airport did not show my purchase and they wanted to charge me even more. After an hour of waiting in line.

And finally, on the 17th or so I had gone to Guangzhou. I have booked a shared car by HaLuo (哈罗) because Dida doesn’t allow foreigners to use the app since there is no verification option — no Chinese ID, passport not allowed means you can’t use the app since you’re not verified. This is a different strategy — before you could use Dida without any restrictions (in Shanghai, for example). HaLuo is the app that still allows foreigners to book a shared cab.

But. My driver canceled the booking and returned the money with the explanation: «You’re a foreigner, other passengers do not want to be in the car with a foreigner.» There is a lot of xenophobia in Mainland. Very. Many. Cases. Especially in the mid-tier cities like Foshan. It’s not the problem of drivers (they earn money), it’s the problem of passengers. There is no excuse for such cases (they are actually simply stupidity), especially in such cases and taking into account where this pandemic had started earlier. 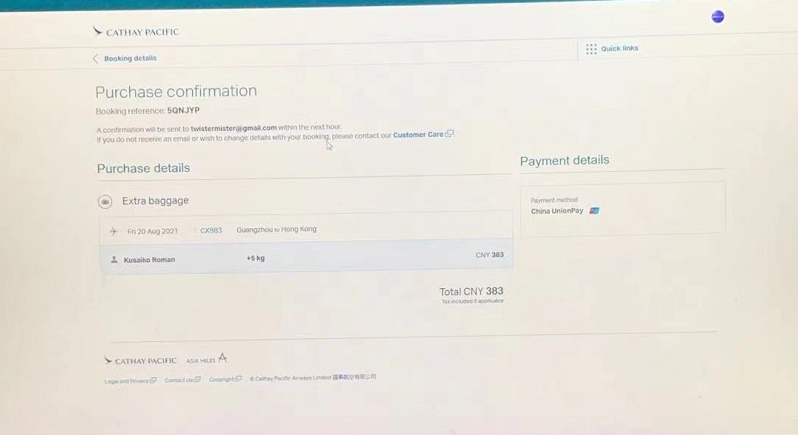 And when I came to Guangzhou the hotel told me I cannot live there. In the apps (Booking.com and Qunar) it was said foreigners are accepted. In fact, it was a lie. Because of the pandemic the hotels try to be safe and ensure they won’t have any problems with the authorities and police (that register foreigners when they are in hotels). By default, all hotel workers think the foreigner came from abroad and he is potentially infected.

I had to find a new spot. It took two hours. And I had to bring my broken luggage there. The hotel crew asked me many questions, I had to pay much more than I have planned but hopefully, I found the room. And the next day I could come to the hospital. So, a trip to Guangzhou and staying in a hotel, all that hustle can be simply explained as: to make a nucleic test for the flight. By the way, to go to Guangzhou I had to take a test in Foshan.

Ridiculous as it is.