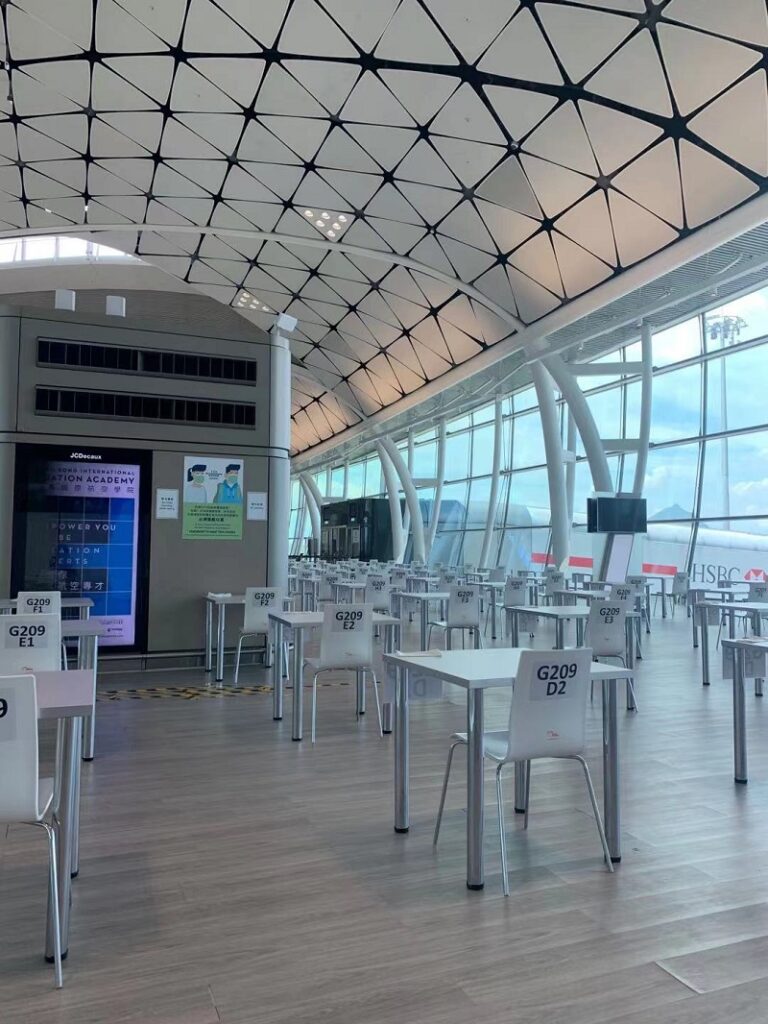 This is the second part of my experience entering Hong Kong during the pandemic. The first one is here. In this post, I will explain the particular procedures entering from Guangzhou Baiyun airport to Hong Kong airport.

The travel may be divided into two stages: in Mainland and Hong Kong.

It is easy to get to Baiyun international airport. You need to get to the subway, proceed through the luggage check (everybody in the subway in Mainlan should put their luggage or bags for the scan), show the green QR health code, and enter the subway. It takes around an hour to get to the airport by subway. There is no problem moving around the airport.

I came almost a day before my flight, did some video editing, slept on the bench (many did the same thing, lol), and waited for my registration early in the morning. I was surprised by the long line waiting for the registration. Many people had a transit flight in Hong Kong, going later to Canada and the U.S. Do not forget — it was the 20th of August, the beginning of the new semester at the universities. 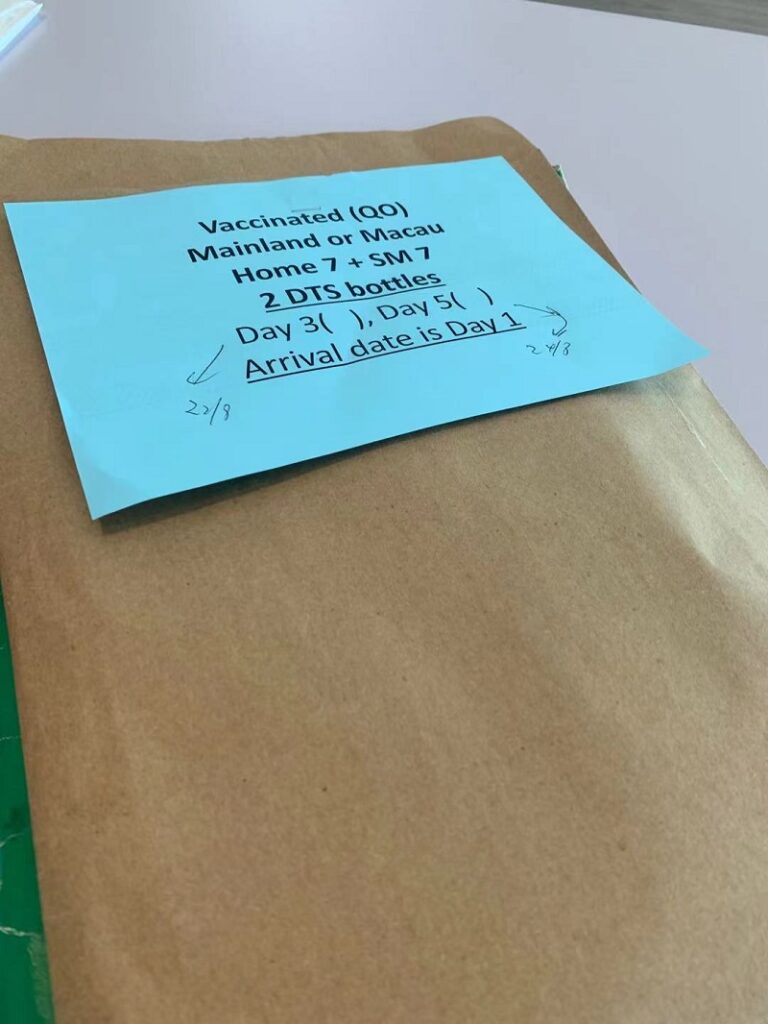 Envelope with the vials and instructions.

So, the plane was packed. The company asked me if I was vaccinated. I showed the certificate. Then, there were concerns about my luggage weight; I showed proof of buying additional weight. Then, immigration control. I was surprised to see that the lady was born the same day as me. For the first time, I met someone like that. Ironic.

Also, it’s better to check whether the special HK arrival health QR code is generated before boarding. It is important to show while leaving Mainland and arriving in Hong Kong. The screenshot is enough. But sometimes, the attendants do not ask for it.

Simple boarding, then simple flight. Over. 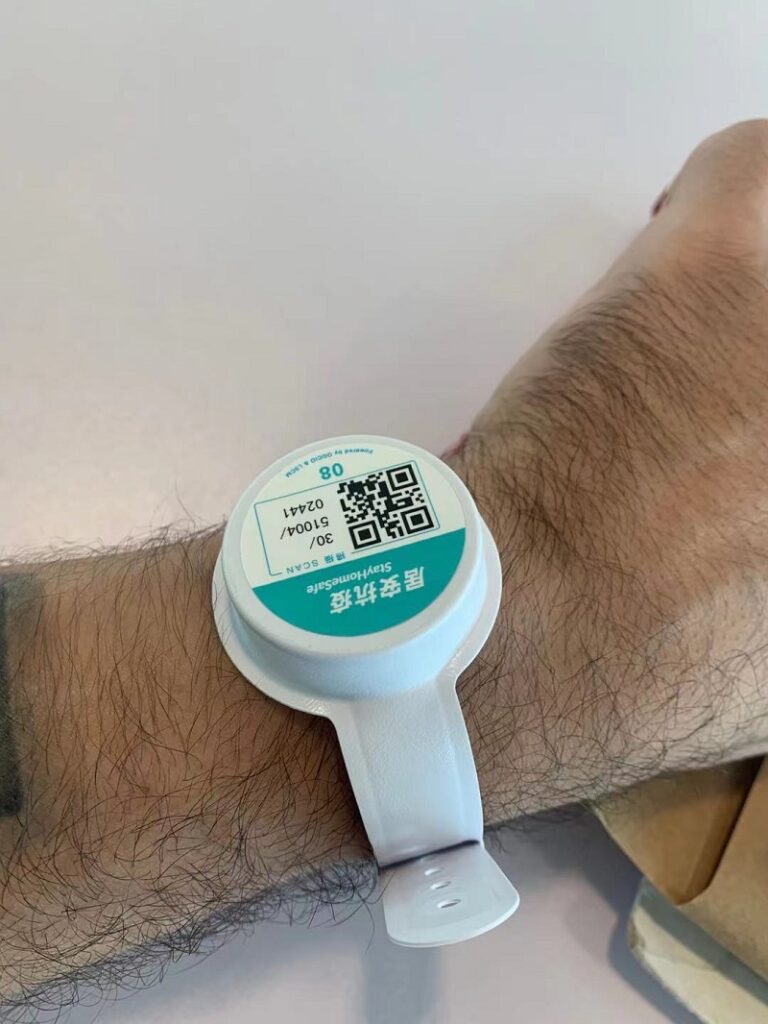 More interesting things started happening in Hong Kong. After the arrival, you have to go to a certain area that looks more like a simple labyrinth. They use the boarding gates zone for it. So, part of the airport is operational only for this matter. If you have a transit flight — you go another way. Then, you take several steps to leave the airport.

First, you register at the counter. There are two ways: Return to HK scheme and normal scheme (mine). RTHK is simpler to proceed with. Normal one requires many documents: vaccination record, nucleic testing record (sometimes, in my case, after all, that Guangzhou hustle, I did not need it after all), passport, admission letter, immigration department letter, and visa (in passport).

The attendant gives an envelope. There are leaflets and a book about all procedures for inbound travelers from Mainland (bilingual). Also, the attendant explains how to use two testing kits: while in the quarantine hotel, you MUST perform testing and send the samples to the collecting stations. The attendant remarks on the testing dates AFTER the quarantine. 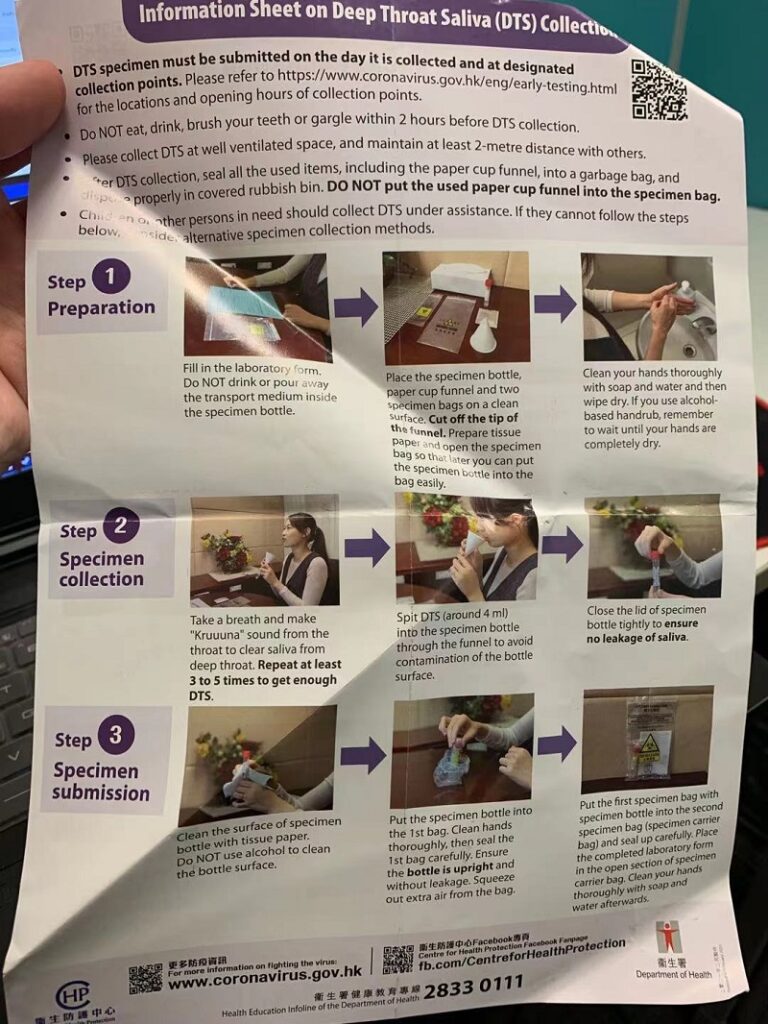 Next, you go and leave your phone number. If you cannot receive calls like me, you may leave the hotel’s phone number. Mobile is better because you will receive SMS about testing results. Also, the department of health may give a call if something goes wrong. I had to leave the hotel’s number because my Mainland number didn’t work. I failed to turn on international roaming. After that, the attendants give you a wrist tracking device you ARE NOT ALLOWED to temper with. Otherwise, you are liable to a huge fine — around 20K $.

Next, you proceed to the testing area. After conducting a test, you can pick a bottle of water and cookies. You go to the seat listed on a small blank of paper given by the test attendant. You have to wait for 30-60 minutes until the test results are released. There is a priority for the cabin crew. They sit in a separate lounge.

The attendant comes with the quarantine order and result. You’re allowed to leave the airport. If you come from overseas, you have to go to the designated transport to arrive at your hotel. If you come from the Mainland, you can go to the hotel by bus or subway. The airport operates normally: luggage pickup zone (carefully put near the luggage lane), cafes, currency exchange counters, etc.

However, it is bizarre that you can go to the quarantine the way you want. Imagine an asymptomatic case or the testing wasn’t precise enough; you can just spread it everywhere. If you are tested and then let out freely, why do you need to quarantine at all? It doesn’t make any sense. 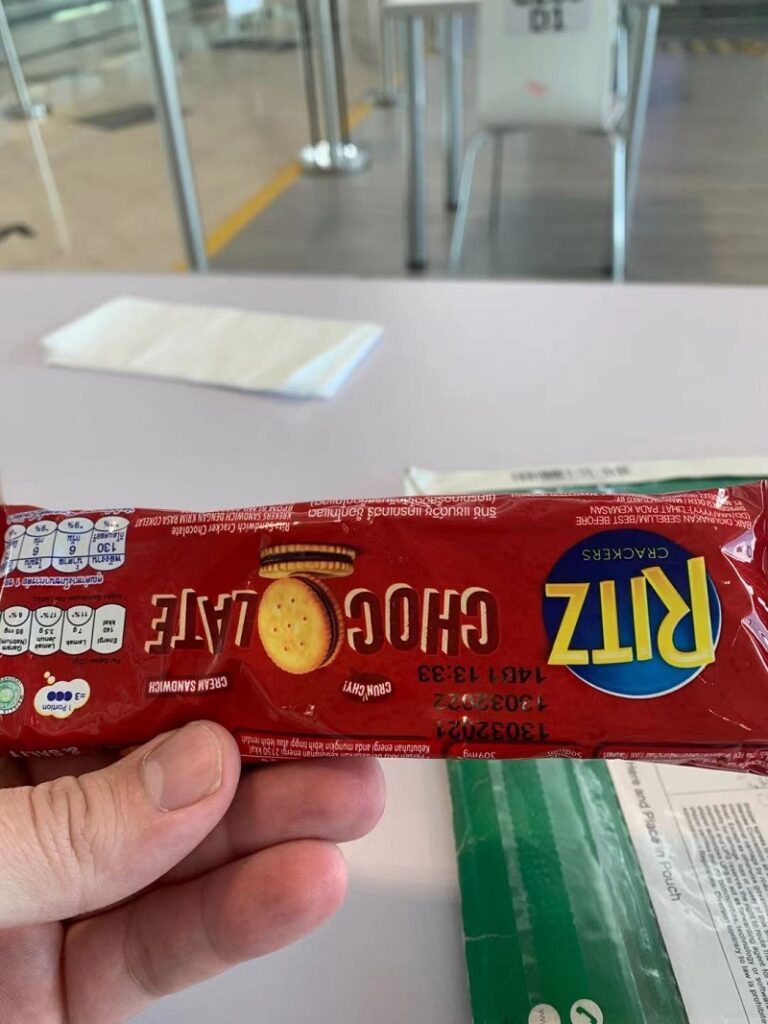 Before coming to the hotel, I bought sandwiches and some other stuff. I have registered, entered the room, and that’s it. I couldn’t leave for seven days. Hopefully, I had a bathtub and could relax there. Also, I could order food online order from the hotel. I tried to eat as little as possible, survived several days on cereal and oatmeal. And my good friend from Shanghai Theater Academy, who lives in Hong Kong now, helped me deliver test samples to the collecting points. The first sample was delivered the next day than required, and it was still fine. Only once did my tacking wristband app ask to scan the device’s QR code.

After the quarantine, I left for the university for registration and spent the whole day doing so. Banking issues took even more time. I didn’t expect banking to be such a hustle. But it’s a different story. 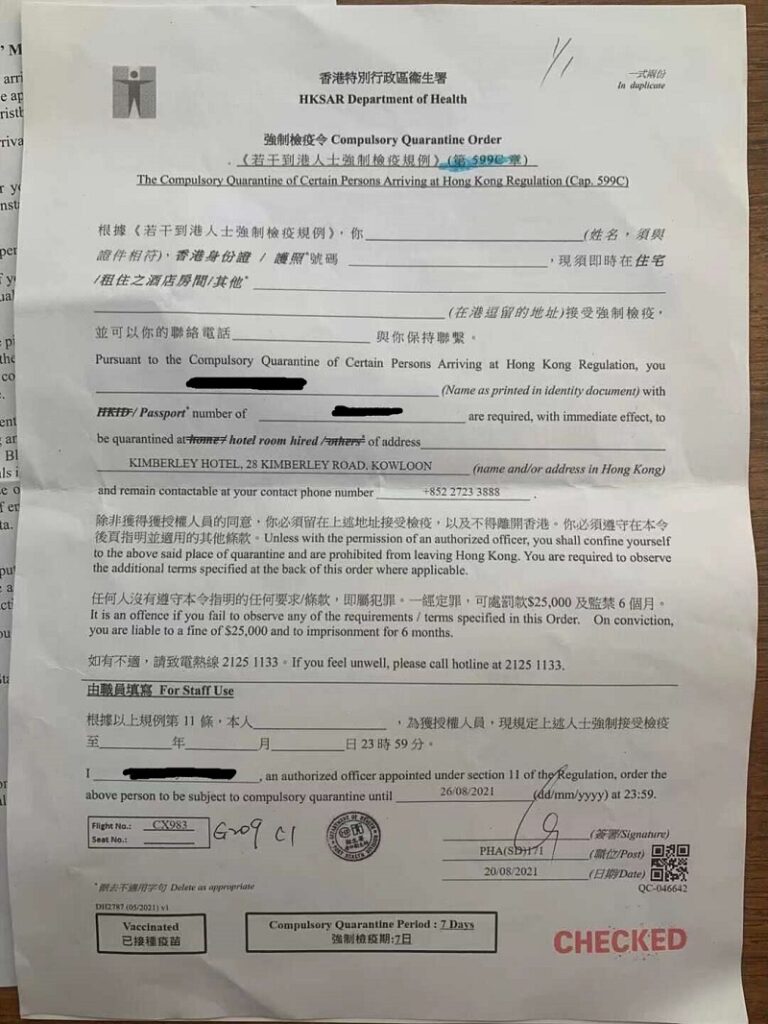 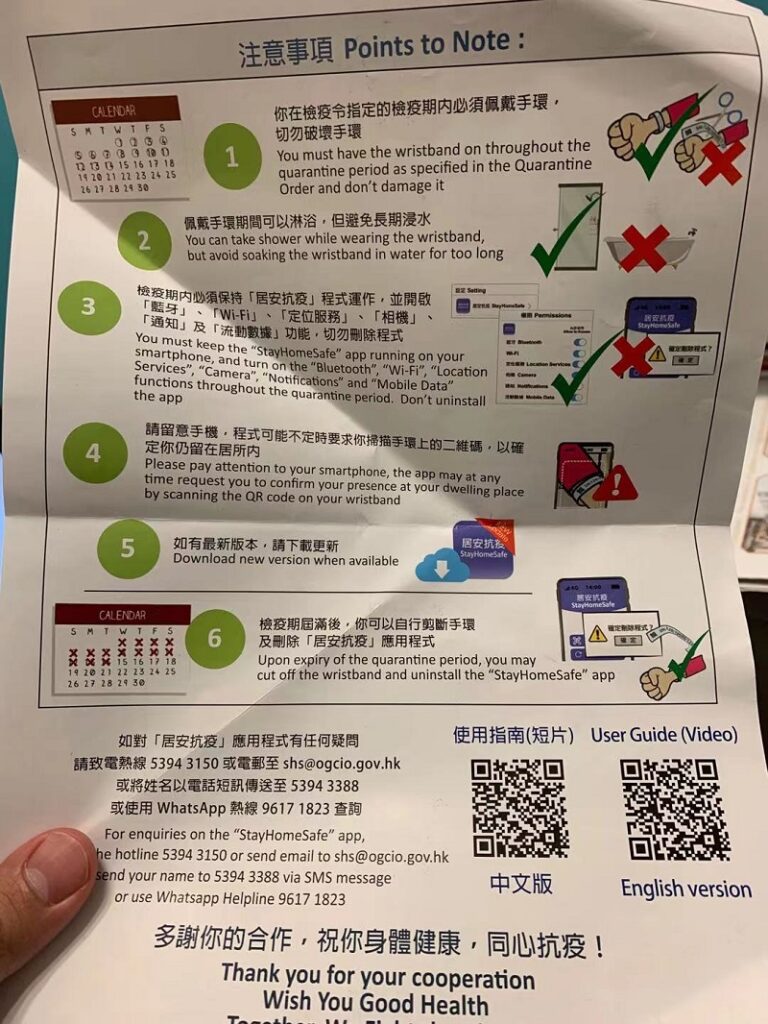 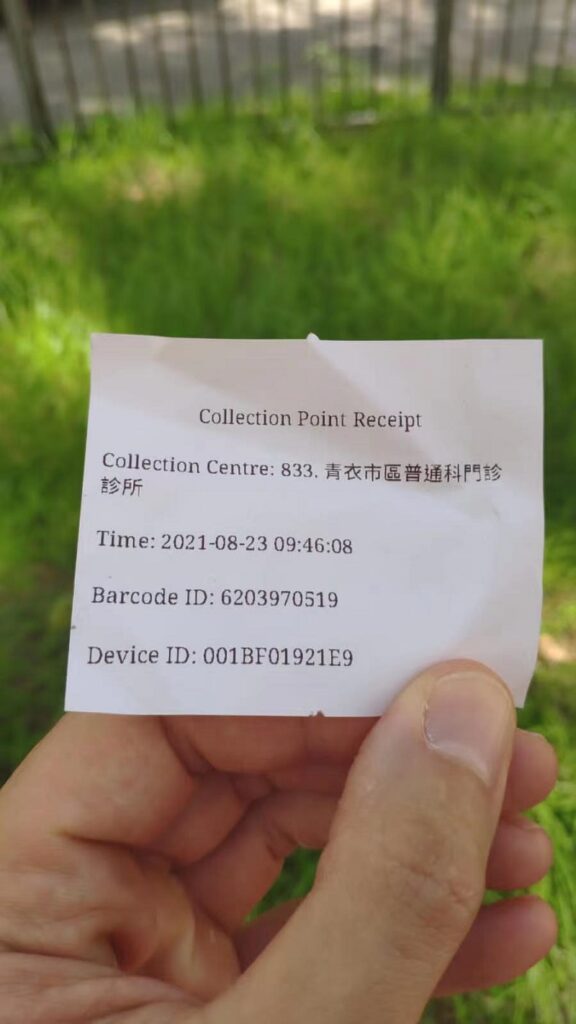 A receipt after sending the sample to the test center.